Here at Progear we are consistently blown away by the incredible images that each and every one of you capture. We love to see what you're shooting, and we've encouraged you to show us your work using the #ProgearFeatures tag on Instagram.

This month, we're pleased to announce that we are now stocking NiSi filters, alongside our other great filter brands. With this exciting news, we thought what better time to show off some of the great images we've seen in the #ProgearFeatures tag around the theme of Long Exposure.

Each photographer we've asked to be a part of this feature has detailed their equipment used to capture the shot, and told us a bit about their process on the day. So read on for a heavy dose of inspiration! And if you're moved to get outside and shoot, be sure to show us by: "Mercer Bay Loop looking north over North Piha, Anawhata, Bethells etc on an extremely foggy day. Fog is great for long exposure photographers in my mind because it reduces detail and gives the solid aspects of the picture the same smooth look you look for in the water. Auckland's west coast is my favourite playground because there are so many awesome vistas and there is always strong tidal movement. Also the fog makes for an awesome pastel shade in the pic with the sun rising on camera right. Using dehaze in Lightroom you can remove the majority of the foreground haze/fog and are left with the smooth effect which comes from the fog. It is also possible on a day like this that a little condensation could have built up on filters during a 2 minute exposure which adds to the effect.

My kit for this pic was a Sony a7rII mounted on a Cambo Actus Mini with a El-Nikkor 105mm f/5.6 enlarger lens. With the enlarger lens being so small I couldn't use my normal Lee filter kit so I had taped on 2 circular B+W NDs (10 stop + 3 stop) and exposure details f/11 + shutter speed 2 minutes with ISO around ~400 to get 2 minute exposure time. The a7rII's ISO performance means it is often easier for me to adjust ISO to achieve my desired shutter speed because I like to shoot in f/8-f/11 range, rather than having to remove filters." "This image was shot in January this year on a winter road trip around Iceland. Pretty brutal weather conditions to shoot in at that time of year, with only 5-6 hours of light a day to shoot in, accompanied with sleeping in the car in temps down to -20 it was character building to say the least. But wow I would do it all again for the amazing sights I got to shoot.

The shoot was really tricky with really strong freezing winds. I had a lot of issue with spray on the camera and the filters. It was a matter of sitting and waiting patiently for a break in the conditions. Luckily I had a brief change in the wind direction and I was able to get about 10-15 mins of shooting without spray." "We had a early rise in Rotorua and traveled to Lake Tarawera for this beautiful sunrise. I used my Fuji XT2 with my Rokinon 12mm and NiSi 10 stop filter. My camera settings were f/5.6 @ 240sec. ISO of 200.

I took several that morning but the clouds really had the movement that I was after in this shot. The Lee Stopper App really comes in handy when trying to determine the exposure for these shots. Nothing like the calm and quiet mornings spent with the camera." 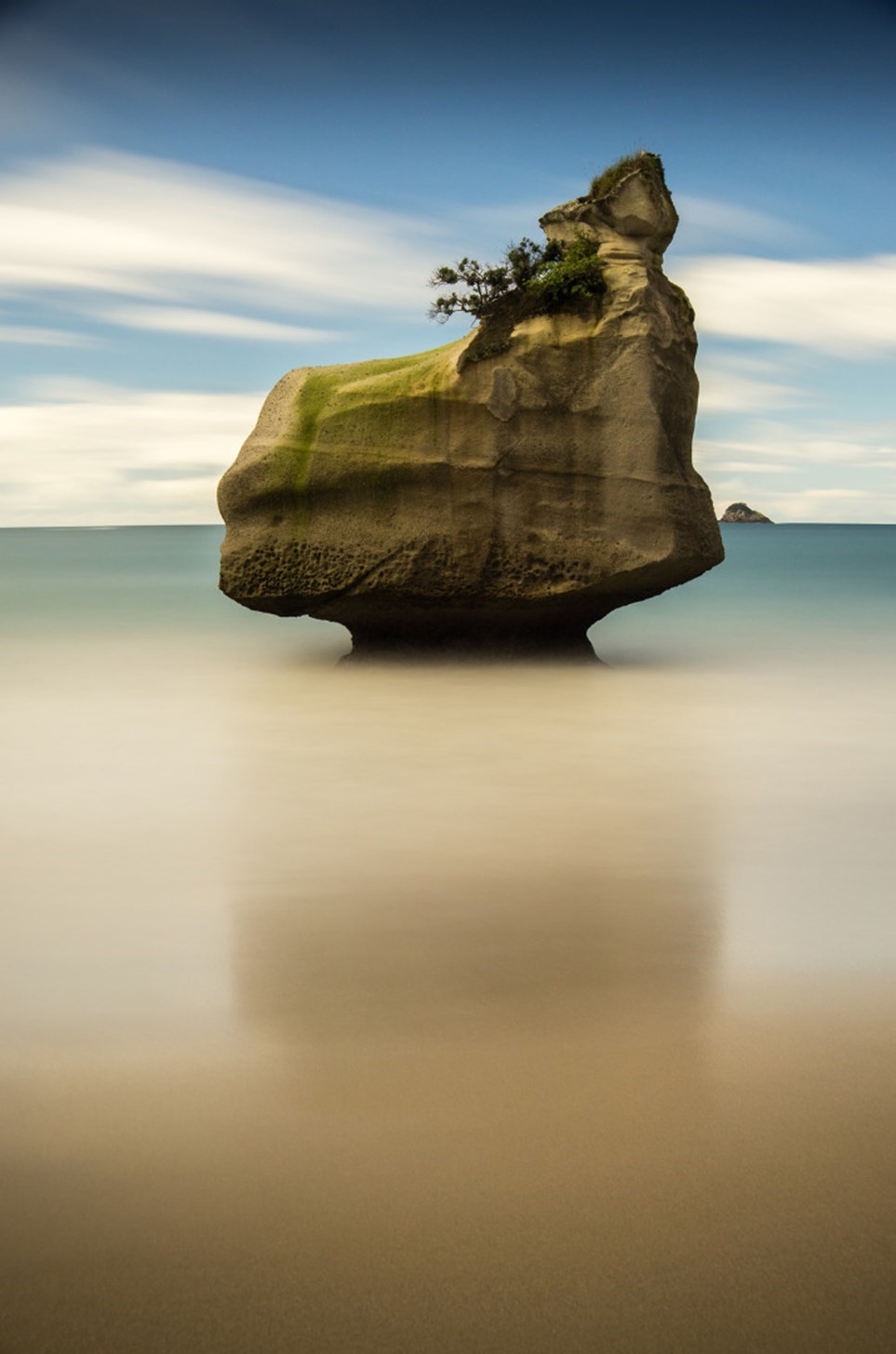 "One of my favourite locations to shoot is down at the marina. I live nearby, so I'm always down here. A 10 Stop Filter helped make richer the colours and gives such depth to the image. The technique is akin to an 'engraver of light'. "Famous for its beautiful lakeside village at the base of a steep mountain range; Hallstatt is a photographer's dream, and in the winter it feels like you are standing inside a real life snowglobe. On our last evening there this year, I walked up to the most well known viewpoint of the town and set up my camera, a Hasselblad 500CM with a Zeiss Planar T* 80mm f/2.8 CF lens, loaded with Portra 400.

With the light fading fast, and to compensate for the reciprocity failure of the film, I counted a 60 second exposure while holding down on the mechanical cable release. After returning from my holiday and sending my film away, I received my scans back a week or so later and was able to see how the photo turned out. "This image was taken at Matai Falls in The Catlins Forest Park with my Nikon D610 full frame camera and a Nikon 20mm f/1.8 lens. The day itself was bright and sunny, but by the time I had walked into the rainforest it was dark and gloomy, so there was no real need for filters of any kind, in fact I had to use my head torch to help me focus the shot! Being the middle of winter there was nobody else around, so I could experiment with composition and exposure times. I’ve found Matai Falls quite frustrating to photograph before, due to there being quite a bit of foliage and general untidiness around, but with some climbing over moss covered rocks, I got my shot.

The shot was edited in Lightroom and Photoshop, and converted to B&W in Silver Efex Pro 2." "Went out to the lake to get a shot with snow on the mountain. Not much snow left.. but still an awesome scene stayed out and watched the sun set till dark.

The image was post processed in Lightroom and Affinity Photo." 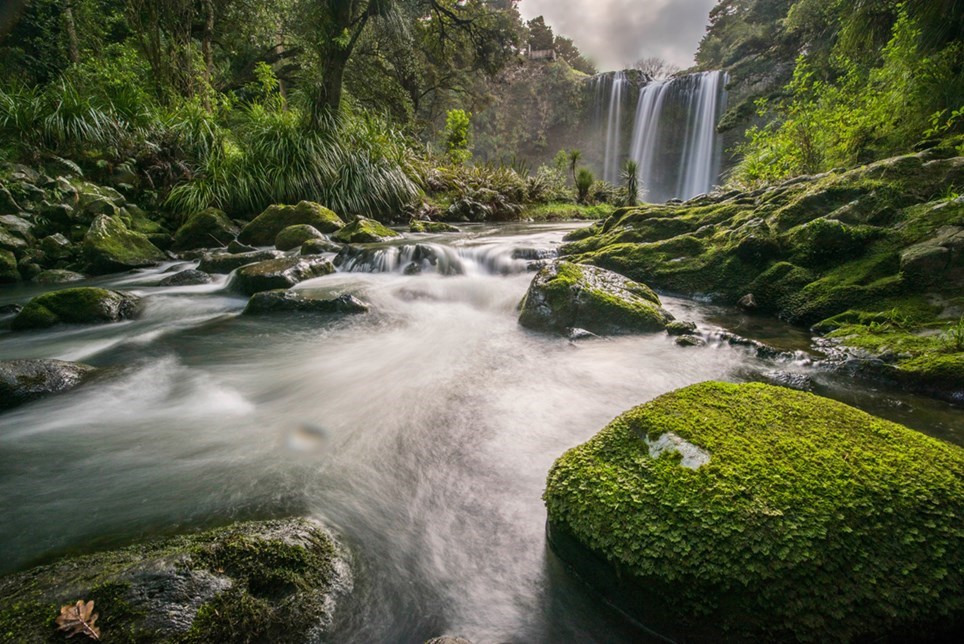 "This was one of the most frustrating and challenging shoots I've had in a while. Spray from the waterfall, high humidity fogging up filters, rain, seriously slippery rocks and the sun directly above the waterfall making the light differential a nightmare.

Three shots at differing ISO settings to expose for normal foreground and extremely bright background above the falls - merged in Lightroom."